The German cockroach is one of the most common indoor cockroach species in Pittsburgh. It favors warm, humid atmospheres,

especially areas where temperatures are around 70° to 75° F. It generally inhabits kitchens and bathrooms where they are found near plumbing fixtures, in cracks or crevices in cupboards, under drawers and kitchen sinks, and similar locations. These cockroaches often cluster together in favorable hiding areas. When severe infestations occur, they may be found in other sections of buildings. German cockroaches can disperse in large numbers from areas of high population densities to infest other locations.

The adult  is about ½ inch long, light brown or tan, and has two dark longitudinal bands or streaks on the prothorax behind the head. This species has the highest reproductive potential of all the common pest cockroaches. Females produce about 30 to 50 eggs at a time. The female carries the egg case until the eggs are ready to hatch.

The immature nymph  is smaller, dark-colored with a light-colored streak running down its back. An immature nymph reaches maturity in about 40 to 125 days. Adult females live about 200 days, producing six to eight egg cases throughout their life.

The Oriental cockroach prefers dark, damp places. Often called a water bug, it is commonly found in damp basements, cellars, crawl spaces, and sewers. It may also be found near drains, leaky water pipes and under refrigerators, sinks, washing machines, and floors. It prefers temperatures under 84° F. The Oriental cockroach can tolerate cool environments and people have even found it surviving freezing outdoor weather. An Oriental cockroach forages mostly on the first floors of buildings. Occasionally, this pest will thrive in the landscape immediately adjacent to structures and may enter if a disturbance occurs, such as a change in the seasons, excess rainfall, or lawn mowing. It can be found occasionally outdoors under sewer covers. It feeds on all types of garbage and other organic material. An Oriental cockroach produces a strong smell and is considered one of the dirtiest of all the cockroaches.

An adult Oriental cockroach is about 1 to 1-1/4 inches long and dark brown, almost black. A male has fully developed wings which are shorter than the body. A female has very short, rudimentary wings (fig. 3). A nymph is similar in appearance to a female only it is smaller and wingless. A female deposits an average of eight egg cases during its lifetime; each capsule produces about 16 young. It takes 300 to 800 days, depending on conditions, for Oriental cockroaches to hatch from eggs and develop into adults.

Cockroaches are attracted to warm, moist environments. They spend the daylight hours in dark, secluded sites under refrigerators, stoves, false bottoms in kitchen cabinets, in the backs of cabinets and in crevices between baseboards and floors or cabinets and walls. They may also be found behind pictures or within electronic equipment. A number of these openings will ultimately lead to voids in the stud walls. The insects leave these sites at night to forage for food and water. The presence of cockroaches during the day may indicate a large population. 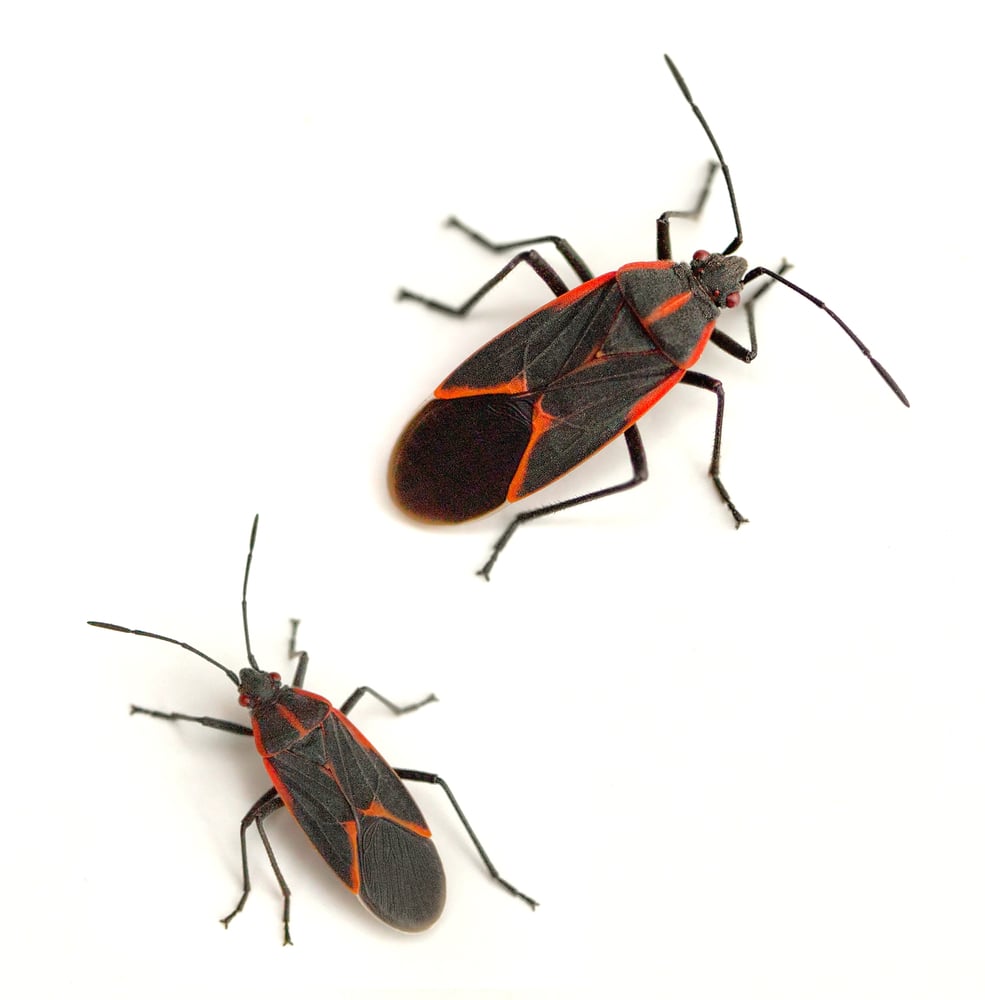 Boxelder bugs, Boisea trivittatus, are familiar insects to most people. They are generally not noticed during summer, but often can become an issue when they try to move into homes during fall as they search for overwintering sites

Adult boxelder bugs are about 1/2-inch long, black with orange or red markings, including three stripes on the prothorax, the area right behind the head. Their wings lay flat over their bodies. The immature nymphs are 1/16th-inch long and bright red when they first hatch. As they grow older and become larger, they are red and black. You can potentially see all stages at any given time during the summer.

Boxelder bugs are primarily a nuisance because they enter homes and other buildings, often in large numbers.  When abundant, they can stain walls, curtains, and other surfaces with their excrement. Occasionally some may seek moisture and may be found around houseplants, although they rarely attack them. In the few cases when they do feed, boxelder bugs are very unlikely to injure indoor plants.

We accept the following credit cards: